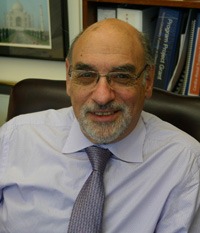 Biography: Irving H. Zucker, Ph.D. is the Theodore F. Hubbard Professor of Cardiovascular Research and Chairman of the Department of Cellular and Integrative Physiology at the University of Nebraska Medical Center in Omaha, Nebraska. He has been Chairman since 1989. Dr. Zucker received his Ph.D. from New York Medical College in 1972. He continued his post doctoral training at the University of Nebraska Medical Center where he became a faculty member in 1973. Dr. Zucker has been involved in studies related to the neural regulation of cardiovascular function. His studies have revolved around cardiovascular reflex control of sympathetic nerve activity in animal models of chronic heart failure. He has been the recipient of a MERIT Award from the NHLBI, an Established Investigatorship from the American Heart Association, the Wiggers Award from the Cardiovascular Section of the American Physiological Society and the Carl Ludwig Award from the Neural Control and Autonomic Regulation Section of the American Physiological Society. He is currently an Editor-in-Chief of the American Journal of Physiology: Heart and Circulatory Physiology. He is a Past-President of the Association of Chairs of Departments of Physiology and a Past-President of the American Physiological Society.